You are here: Home1 / Blog2 / blog3 / What is the structure of the double shaft mixer？

The motor is decelerated by V-belt drive and planetary reducer, from high speed to low speed, and the power is transmitted to the mixing spindle through the spline shaft and spline shaft sleeve; at the same time, the synchronous drive shaft is connected between the two reducers to ensure the two mixing spindles Synchronize. The advantages of this system are: smooth transmission, large transmission torque, and high cost performance. 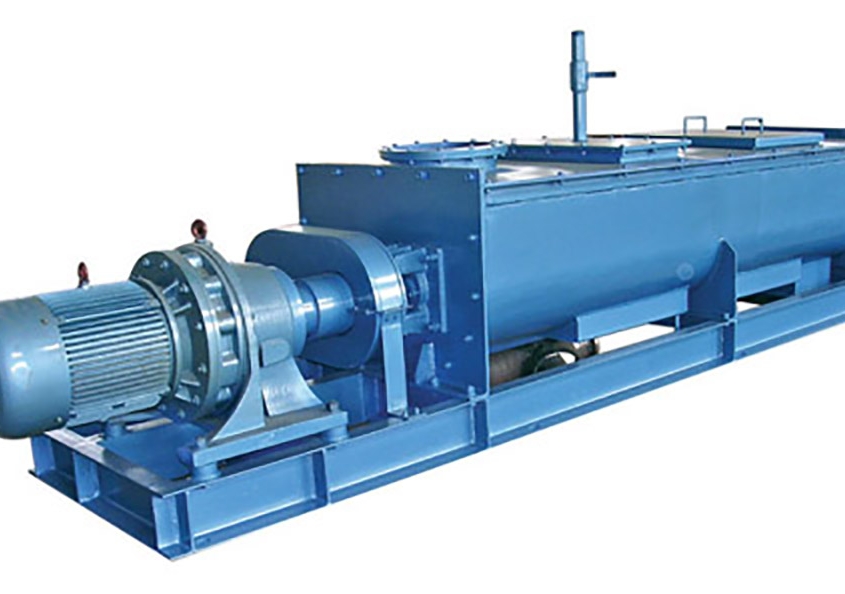 The shaft end seal is composed of a bearing seat, a bearing, and a lubricating oil path to support and position the agitating shaft. At the same time, the high-pressure lubricating oil path lubricates, dissipates, and seals the support base and the agitating shaft head to form a sealed oil chamber To ensure that the mud does not erode the bearing seat and the mixing shaft.

The mixing cylinder is a w-shaped double barrel bent from a wide and thick steel plate. It has a strong yield force under the support of a specially designed and manufactured frame. The supporting part can also make the cylinder rigid enough to ensure a double bedroom. The parallelism of the axis and the concentricity of the single axis. Each side is equipped with a maintenance platform, which can be retracted and supported according to needs, which is convenient for operation and maintenance. In order to prevent the abrasion of the mixing cylinder, a high-hardness high-chromium wear-resistant lining plate is installed inside and on the side of the mixing cylinder. The lining plate is fixed on the cylinder block with bolts. Liner blades: high chromium wear-resistant cast iron. Lifespan is up to 70,000 cans.

The mixing device is composed of a main shaft, a mixing arm, a blade, a scraper, etc. The two mutually parallel main shafts of the mixing device are each equipped with 7 mixing arms, and the two adjacent main mixing arms on the same main shaft are distributed at 60 °. The relative angle relationship is fixed, and this fixed relationship is guaranteed by the coupling between the two reducers (in view of this, do not easily disassemble the coupling). Each agitator arm is designed according to hydrodynamics to make it stronger and reduce the resistance during agitation, as well as reduce the amount of wear.

It is composed of the main body of discharge door, cylinder and proximity switch. During automatic operation, three states of fully open, fully closed, and half open are generally set. During operation, high-pressure gas is passed to the cylinder, and the cylinder drives the swing lever to rotate the door body around the bearing seat to achieve the purpose of opening and closing the door.

The above is the structural knowledge about the twin shaft mixer. It can be seen that this equipment is very excellent and efficient from design to production, which can meet the mixing needs of various related industries.