You are here: Home1 / Blog2 / blog3 / What is the internal structure of the hammer crusher? How does it work...

The hammer crusher is composed of a box body, a rotor, a hammer head, a backing liner, and a caster bar. Several rows of hanging hammer bodies are installed on the main shaft of the crusher, and pin shafts are penetrated through the pin holes on the circumference of the crusher. The hammer shaft is used to hinge the hammer between each row of hanging hammer bodies. The working surface can be replaced after the hammer is worn. There are two trapped pin holes on the top. The distance from the pin hole to the axis of rotation is different. It is used to adjust the space between the hammer and the grate.

In order to prevent platinum movement of the hammer body and the hammer, the compression hammer disk and the lock nut are used at both ends of the hammer body to be unchanged, and the two ends are supported on the rolling bearing, and the bearing screws are not changed on the casing. The main shaft and the motor are directly connected by an elastic coupling. In order to make the rotor operate smoothly, one end of the main shaft is equipped with a flywheel. 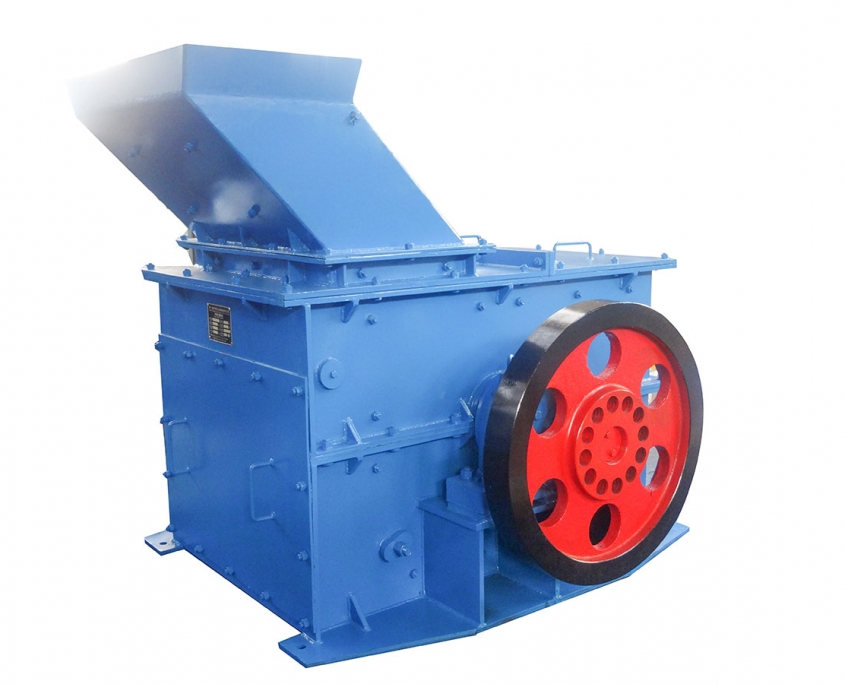 The shell of the hammer crusher is composed of the lower machinery, the back upper cover, the left side wall and the right side wall, and the parts are connected together by screws, the top is built with a feeding port, and the inner wall of the shell is all lined with high manganese steel Inlay is convenient for replacement after the lining is worn. The lower machine is welded with carbon structural steel plate. In order to place the bearings on both sides to support the rotor, the bearing support is welded with high manganese steel. The bottom of the chassis can be directly used with anchor screws. The concrete remains unchanged. The rear upper cover, left side wall and right side wall of the casing are also welded with carbon structural steel plates.

There is no protective measures between the casing and the shaft. The ash leakage phenomenon is very serious. In order to prevent ash leakage, The shaft seal is installed in any part of the casing that contacts the shaft. In order to facilitate maintenance, adjustment and replacement of the caster bar and hammer head, maintenance holes are opened on the lower machine and both side walls.

The rotor is the main working part of the hammer crusher. The rotor is composed of the main shaft, hammer disc, pin shaft, hammer head, etc., and the pin holes are evenly distributed on the disc. The hammer head is suspended by the pin shaft. In order to prevent the disc and hammer head The axial movement of the shaft is fixed at both ends of the pin shaft with a lock nut, the rotor is supported on two rolling bearings, the bearing is unchanged on the support of the lower machine through screws, and the two positioning pins are not changed at the distance between the bearings.

In order to reduce the peak load of the motor and reduce the wear of the hammer head, the rotor is purposely equipped with a flywheel at the end of the main shaft in order to store the kinetic energy of the rotor in motion. The main parts of the rotor are specifically described below.

The hammer crusher beats the rock at high speed with the hammer head, and the rock has a great speed and kinetic energy in an instant. In order to prevent the wear of the frame, the inner wall of the frame is made of manganese steel as the lining plate, and the impact plate is made of high-strength steel. Strengthen the disposal, the superior wear resistance and impact resistance of the lining plate and the impact plate. Due to the harsh working environment of the hammer crusher, the performance of the hammer crusher is related to its service life. The material of the combined parts.

The advantages of hammer crusher

(2) The required granularity can be adjusted according to customer requirements.

(3) The structure of the hammer crushing machine is sealed, and the problems of dust pollution and mechanical ash leakage in the crushing workshop are dealt with.

(4) The overall design is beautiful in appearance, compact in structure, few wearing parts, easy to repair and so on. It is a rectification and replacement machine.

What are the maintenance methods of the roller skin of the briquetting mach...
Scroll to top
x
x